Spotlight on the Palm Springs Plaza Theatre: Renewal through Philanthropy and Partnership 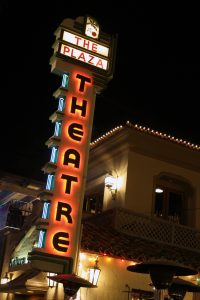 Thanks to the valiant efforts of locals and philanthropists, the iconic downtown Palm Springs Plaza Theatre appears to be heading toward a vibrant third act.

“The current goal is to bring the theater back with respect to its look and feel of 1936, when it was completed,” says J.R. Roberts, president of the Palm Springs Plaza Theatre Foundation, which has spearheaded efforts to restore the theater. “It would be state-of-the-art design for a theater today, keeping in mind easy access for people with disabilities. We want people to walk in and think it’s 1936, but also have it feel ‘modern.'”

To be sure, the theater is rich in history. It opened in 1936 with the world premiere of the film “Camille,” starring Greta Garbo, a noteworthy event at the time — typically movie premieres took place in Hollywood at celebrated portals such as Grauman’s Chinese Theatre.

“Palm Springs Plaza Theatre had a magical glamour to it from the day it opened,” Roberts says.

Decades later, The Palm Springs International Film Festival debuted at the outpost, with former Mayor Sonny Bono at the helm. The Palm Springs Follies — a treasured entertainment show in its day — enjoyed a fabulous tenure at the theater as well.

Some 80 years after its birth, the curtain dropped, and the theater closed in 2014. Several attempts to breathe new life into it never took.

Roberts, who calls himself a preservationist at heart, says it “always drove me a little bit crazy that this theater — such an important gem architecturally — had been boarded up for so long. I thought, ‘here’s our crown jewel and people don’t even know about it.’ It always haunted me.”

Prior to Roberts finishing his term as vice mayor and city council member, then City Manager David Ready asked him what he felt his “legacy” would be in Palm Springs. Roberts, admittedly, felt “worn out.” He’d served in the political arena for some time. 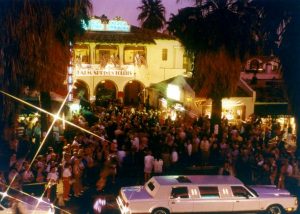 That was in late 2019. The winds of fate picked up after that and the city council agreed to create a subcommittee to oversee the restoration. In just a short amount of time, about $475,000 was raised. Then the pandemic arrived, temporarily stalling efforts.

But, Roberts says, things are on the uptick again.

Recently, Palm Springs Plaza Theatre Foundation received a grant from the Inland Empire Community Foundation through the Sheffer/Scheffler Donor Advised Fund. Ann Sheffer, former chair of the Palm Springs Public Arts Commission, and her husband, Bill Scheffler, are loyal and generous supporters of the arts. Sheffer says she likes to provide seed money or fund the first step in a campaign because she can do it quickly and, having been involved in nonprofit work herself, she understands the value of such donations. The Sheffer/Scheffler grant was used to bring the Plaza Theatre sign back to its original glory.

Sheffer says: “The contribution to the Plaza Theatre was a pledge that I had made when I was on the original committee that started the renovation — but I specified that my contribution should go to making the neon sign in front of the theatre work — partly because a number of people commented on Facebook that it was something that the Public Arts Commission should do. Since I’m no longer chair, I decided to do it myself!” 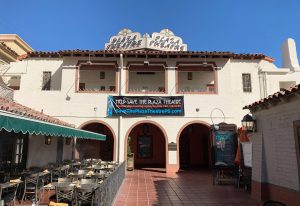 “It felt like a marriage proposal at the time,” Roberts muses about Lee’s involvement. “But I knew I had to fully commit to the project after that.”

Now he wants people to be clear of what the overall goal is, which is “to create a community venue with a variety of entertainment — and punch.”

Currently, the theater has approximately 800 seats. That number will be reduced when seats are removed and replaced with wider chairs. The theater’s scope and size are a big plus, too — bigger than the Annenberg Theater at Palm Springs Art Museum yet smaller than McCallum Theatre. It’s big enough for filmgoers and decent size productions.

“One great thing is that the city owns the theater outright,” Roberts says. “Technically, the theater doesn’t ever really have to make a profit. The goal of the theater is to double break even. The city provides for an amenity much the way it provides a recreation center or a pool.”

Because “profits” are not the driving force per se, Roberts says the theater may be more affordable — not only for people who want to put on events there, but for people attending events.

“That’s going to open it up for a lot of programming that simply couldn’t afford a venue of that size,” Roberts says. “It allows for more multicultural entertainment. I’m happy the project is doing great. We have the world’s best board of directors, which makes a lot of this possible, and we now have commitments to more than $7 million towards our goal of $12 million. That’s something.”

Learn more about how giving tools like a Donor Advised Fund can support the causes you care about!

Stay up-to-date on all the good work we’re achieving through the power of philanthropy. Sign up for our monthly eNewsletter, Philanthropy Matters.