Spotlight on Palm Springs Friends of Philharmonic: Five Decades of Music in the Coachella Valley 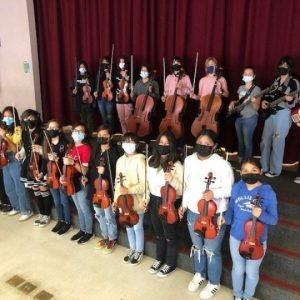 Spearheaded by Dr. Mimi Rudulph and Nancy Alder Thornton, the event successfully launched the Palm Springs Friends of Philharmonic, which has become one of the most significant non-profit arts organizations in Coachella Valley.

“Our primary purpose is to bring the joy of classical music to the Valley,” says Palm Springs Friends of Philharmonic Executive Director Marnie Duke Mitze. “We do that through several different avenues, but the primary avenue is our fabulous concert series.”

Driven by its mission to bring a series of classical music concerts annually to the Coachella Valley, the organization also strives to promote and encourage interest in classical music.

“What’s unique about our program is that we bring in touring orchestras,” Mitze says, noting that the Los Angeles Philharmonic, Israel Philharmonic Orchestra, the Chicago Symphony Orchestra, and other “great orchestras” from around world are among the extraordinary talent that have filled the stages over the years. “The program is one of the highest end of cultural things here in the desert, really, as far as world-class symphonic music. If we weren’t here, a lot of people would be driving to Los Angeles on a regular basis to experience music of this caliber.”

This year, the organization will present seven symphony orchestras at its treasured outpost, the McCallum Theatre. The season opens with the return of the Israel Philharmonic Orchestra on November 2 with conductor Lahav Shani, Conductor overseeing Paul Ben-Haim’s Symphony No. 1 and Gustav Mahler’s Symphony No. 1 in D Major “Titan.”

That concert will stand out for many reasons, Mitze shares, but one unique thing about the Israel Philharmonic Orchestra is that it’s an organization where the orchestra musicians themselves elect their next music director. “Basically, the musicians voted for this young musician to become the next music director,” she adds.

Mitze says the funding will play a major role for several initiatives, especially its primary goal: overseeing a successful run of the symphonic series.

“The cost of presenting the symphony orchestras is staggering,” Mitze says. “You’ve got a lot of people and airplanes and hotels, and it’s just a large ensemble to move around. Our ticket sales cover just over half of our cost of presenting these orchestras. It’s only through the donations of our wonderful friends and members, and other funding, that we’re able to do what we do.”

Another interesting funding aspect is the organization’s Youth Education Program. This summer, Friends of Philharmonic is supporting approximately 15 Coachella Valley students—from middle school to high school—in summer music camp programs. Camps in Idyllwild and Pasadena are among the camp destinations.

“We’ve had kids go as far as the East Coast,” Mitze says. “It’s our way of encouraging young people to study music and to continue their studies during the summer.”

Typically, students audition, and if accepted into the camp, a process of deciding which camp to go to follows. Friends of Philharmonic connects with the camp and pays the student tuition. Camp programs vary from two weeks to a month.

To be sure, the impact of Friends of Philharmonic stretches far and wide, and overall fundraising comes from several different sources. The annual membership program stands out—individuals who subscribe to concert series also become members of the organization by making an annual donation. Those donations can vary from $100 a year up to $10,000 a year or more, depending on people’s ability to give and their interest.

“That’s our primary annual sustaining program,” Mitze explains. “Additionally, this year we just started a new concert sponsorship program. We ask individuals or groups who can do so to help us sponsor a specific concert. It was hugely successful last year when we first started it, and it sold out in about three weeks. That’s a new revenue source for us in terms of donations.”

Friends of Philharmonic is also currently working on a corporate circle—having corporations join them on an annual giving basis. It hopes to launch that in the fall.