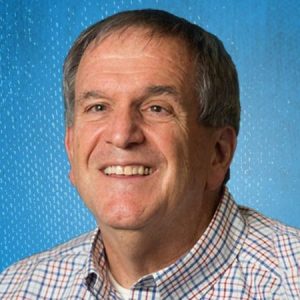 Randall Lewis, renowned regional homebuilder, developer and longtime philanthropist, has made a generous gift of $80,000 to IECF’s Here for Good Fund in honor of the Foundation’s 80th Anniversary. The Here for Good Fund was established in 1992 to provide annual operating support to IECF, allowing us to offer community leadership on multiple issues. We sat down with Randall to talk about his thoughts on  existing and emerging work that needs to be done in the Inland Empire, and why IECF plays an important role in that work.

Although familiar with IECF for many years, Randall says he initially thought of the Foundation as a Riverside County/Riverside City organization. “Without minimizing IECF’s accomplishments from previous decades,” he says, “my understanding of the Foundation changed when Michelle Decker became CEO. She’s been really influential in showing me not only the great work IECF has done, but also the potential the Foundation has to be a change agent for good in the Inland Empire.”

One of the topics Michelle and Randall have talked about is how to build a culture of philanthropy in the region. “That culture exists in a small way,” he tells us, “but it’s nowhere near what we ought to do to reach our potential in this region.” Randall explained that he used to think of community foundations as institutions that did good work, gave out scholarships, and helped people with some of their financial and estate planning needs. “But when I was talking to Michelle, it was as though I was speaking to the best community planner, the best economic development person, the best advocate for social equity. She has such a broad vision and she opened my eyes to ways of thinking that I had not considered.”

Among Lewis’s interests is the role of “collective impact.” He espouses the idea that we can all work together to make a real difference. “I’ve always cared about inclusivity and helping people, but here I’m talking about helping everybody. As Bruce Springsteen says, ‘No one wins unless everybody wins.’”

His priorities for impact and collaboration include health, education, and innovation and entrepreneurship leadership. “In the broadest sense of the word, I’m interested in promoting not only physical health but mental health and community health. I’m really interested in healthy cities, schools and businesses.”

While health and education have historically been issues he’s devoted attention to, Randall tells us that in the last couple of years he’s begun to focus on innovation and entrepreneurship. “I look at all the needs of the region – health, safety, education – and you can’t prioritize one over the other. But for me, the reason I care about innovation and entrepreneurship is the question of how we’re going to grow jobs and opportunity for all segments of the population.”

Lewis is currently involved in projects for Centers of Innovation and Entrepreneurship with Claremont McKenna College, University of La Verne and Chaffey College – with potentially more on the horizon. He would like to play a role in facilitating collaboration and research among leaders of innovation and entrepreneurship. “Our region has not necessarily been associated with these fields,” he says, “but with over 4 million people in the IE, we’ve got a lot of talent here. I like to think about how we can unleash that talent and harness the energy to give people opportunities to think more entrepreneurially.”

He favors looking at potential intersections between all of his areas of interest. For example, “I hope we’ll look at health care as a source of innovation and entrepreneurship for the region. We’ve got a lot of talent, energy and great educational institutions. Now we have to get everyone thinking together in new ways and combinations so we can set up some industry clusters and build new jobs in healthcare. I’m hopeful, too, that – for me personally and through the Foundation – we can increase efforts to make this a more sustainable region.”

The Lewis Family legacy has also included a focus on equitable housing. “It’s ingrained in us. Our father was a champion of fair housing. We’re interested in creating great places to live with a wide variety of housing opportunities for everyone.” Building a sense of belonging is also an important factor, he says, referring to the term “otherness.” “Otherness is the concept of feeling different. And we want to build communities that bring people in, meet their needs, and make them feel like they belong to something.” Like IECF, he envisions communities where people prosper, belong, give back and see a future for themselves and their families.

The Lewis Group of Companies has a presence in about 40 cities throughout California and Nevada, so we wondered how Randall defines his own community. “I suppose I’m a citizen of the world,” he laughs. “But really, I live in Claremont, and we do so much work in cities, such as Chino, Fontana, Ontario, Rancho Cucamonga, Rialto, and Sacramento. I feel strongly connected to at least 15 of the cities we’re in. For over a decade, I have been very involved in the Southern California Association of Governments (SCAG), where we represented about 19 million people in Southern California. And I realized, for example, that if you can’t solve Long Beach’s problems at the port, you may not have jobs in Ontario or Riverside. So it made me think much more regionally on issues like air quality and drought and water supplies. I feel very connected to the region.”

Lewis believes partnerships are the key to the region’s future. “We have so much educational horsepower here with schools like UC Riverside, Cal State San Bernardino, Cal Baptist, University of Redlands and the Claremont Colleges. How do we leverage that, and make the IE a central point of collaboration, where people from outside of the region are coming to us for answers?” He points to Peter Drucker’s famous quote, “The best way to predict the future is to create it.”

Circling back to “building a culture of philanthropy,” Lewis says he would like to see the IE get its fair share of funding, referencing the 2019 report “Inland Empire: Changing the Narrative.” The report showed that “nonprofits in this region received donor support in the amount of $25.55 per capita, as compared to the state average of $262.99.”

Randall says his investment in the Here for Good Fund represents his admiration of IECF’s accomplishments, and his confidence in our board and leadership. “I saw that 100% of your board had given to the 80th Anniversary campaign,” he says, “and that was inspiring. I want to do all I can to support the wonderful work of the Foundation. There is much more to be done in our region, and I want to be a conduit for that.”

Brie Griset Smith, Senior Vice President of Charitable Giving, said, “A contribution to the Here for Good Fund is a capacity investment for our organization. We see Randall’s generous gift as an affirmation of our work, and a true compliment to our leadership, board and staff. It means we have a shared vision for a better future for the region, and it underscores the important role of a strong Foundation.”

If you would like to join Randall Lewis and our many other valued donors in celebrating IECF’s 80 years of creating a vibrant region, contact Brie Griset Smith at bgrisetsmith@iegives.org.

Stay connected and learn about all the good work we’re able to do through the power of philanthropy. Sign up for our monthly eNewsletter!