On Community, Legacy, and Saving the Salton Sea: A Conversation with Board Member Jeremy Hobbs

At IECF, our board members are instrumental in helping us achieve our mission of strengthening the Inland Empire through philanthropy. They’re our ambassadors, advocates, strategists, and supporters. Today we’d like to introduce you to board member Jeremy Hobbs, President of Western Wind Foundation, who also heads up our Marketing and Charitable Giving 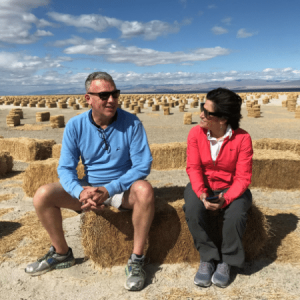 A California native, Jeremy grew up in LA and Sacramento. He attended Sacramento’s Jesuit High School, where the school’s mission focused on developing leaders of competence, conscience, and compassion who strive to build a better world. These core values remain at the forefront of his approach to business and community involvement.

During his undergrad studies at Pomona College and after graduation, Jeremy worked for dozens of water districts throughout California, especially in areas of high growth. He grew to know the Inland Empire well – including work in Rancho California, Chino Hills, San Bernardino and the Coachella Valley. A law degree from the University of Chicago and 17 years of practice in Chicago followed before Jeremy went into business with a client. They established the predecessor of Western Wind Foundation in the late 1990s, and Jeremy has overseen its work since 2012.

As Jeremy says, a western wind is a nourishing wind. In philanthropy, his primary goal is to use the Foundation’s resources and funding to uplift and nourish start-ups and existing organizations that are doing good work in their areas of expertise. He’s spent the last ten years getting to know the needs of our region and figuring out how to best support nonprofits while helping them build up their infrastructure. Western Wind Foundation doesn’t focus on a single “passion project.” Instead, Jeremy looks to make investments – donations that create a “trifecta” of impact:  program development, organizational improvement, and increased fundraising. For example, Western Wind funded a program that uses high school students to work on environmental issues, with a matching grant appeal so that the Foundation’s funding would be doubled or tripled. “I strive to use the same money more than once!” Hobbs says.

Jeremy says that his goal is to make it easier for others to do their jobs well – delivering better services, obtaining more recognition and funding, solving community problems. That’s where he believes IECF fits in – by building relationships with donors and professional advisors who can clearly see the impact of their philanthropy on strong, capable nonprofits doing effective work in the region.

While Jeremy donates and advises, he doesn’t sit on the boards of the nonprofits he supports. IECF is the exception. “I see IECF as a partner,” he says, “I spent a long time learning about the Foundation before I joined, and I realized this is a way I can really expand my strategy in giving.”

This year, as chair of our Marketing and Charitable Giving Committee, Jeremy finds himself at the center of helping us plan our 80th Anniversary Celebration! A year-long schedule includes the announcement of at least eight IECF Signature Funds raising $80,000 each. Grants from these funds will support several pressing needs of the region and, perhaps most importantly, will help engage donors and nonprofits to build up a culture of philanthropy in the IE.

Brie Griset Smith, IECF’s Senior Vice President of Charitable Giving said, “Our board members are stepping up like never before to draw in new donors and invigorate our thinking about what is possible for the Inland Empire. Jeremy is helping us through his giving of time, talent and treasure to achieve new goals for the IE.” 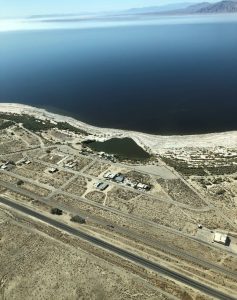 Today we’re pleased to announce the first 80th Anniversary Signature Fund: The Salton Sea Fund, generously seeded by the Western Wind Foundation and Jeremy at $40,000. We spoke with him about his interest in the Salton Sea.

“Because I worked in water districts in the 80s, I learned early on that California’s water supply was in danger,” Jeremy told us. “When I moved to Palm Springs in 2012, I started going to the Salton Sea and got interested in learning what was going on at a scientific, economic, and social  level.”

In the 1950s, the Salton Sea was a recreation area with plentiful opportunities for boating and fishing. Over the years, a declining water supply has resulted in salinity levels so high that dead barnacles and fish bones line the beach. Excessive algae growth creates the strong smell of sulfur that sometimes wafts its way over Palm Springs and into the LA Basin, while migratory birds have lost critical habitat.

The changing landscape reveals more than 30,000 (headed toward 60,000) exposed acres as the sea continues to dry up, with insufficient efforts made to address the change.

“What the Salton Sea represents to me is the entire health, environmental, community and economic development of the Imperial and Coachella Valleys,” said Jeremy. “While Palm Springs and the north and central part of the Coachella Valley are rich with enormous wealth, fabulous homes and beautiful golf courses, there are about 3500 people living near the Salton Sea who have homes without running water. That disparity is just amazing to me.”

“Economically, we have jobs available in agriculture and hospitality, but we need to supplement those with jobs that can sustain families over a long period of time. We need to shore up our human infrastructure. Environmentally, the problems will only grow as the sea shrinks and the dust increases. The solutions to the Salton Sea will cost billions. I don’t have the ability to do this on my own, but I can contribute to strong organizations that are actively working to take control of their own futures. This is not a future problem. It’s here now, and we need to act immediately.”

Jeremy adds that the Salton Sea offers lithium and geothermal capabilities as assets to the community that can create higher-paying jobs in the region. “Suddenly, people are paying attention! We need to seize this opportunity and get people engaged with organizations like Alianza Coachella Valley, Audubon, the Pacific Institute and the Water Foundation. We can weave all these voices together and become a stronger, more powerful force for change. This is a regional issue with broad impact (dust storms, damage to crops, increased health repercussions like childhood asthma, and the very real threat to our hospitality industry). A natural place for funding to land is at IECF, where there’s a long history of excellence in managing funds for the benefit of the community.”

What does the ideal solution look like to Jeremy? He believes there’s a middle ground between the idea of restoring the Salton Sea to its 1950s heyday status and the cynical approach of just letting it dry up. “We need to come to an acceptance of what a sustainable sea level looks like, and then we have to decide what to do with the remaining land, whether that’s agriculture or creating wetlands. And, most importantly, we need to implement a practical solution that’s developed with and takes into consideration the surrounding communities.”

The establishment of the Salton Sea Fund at IECF is just a beginning to raise awareness and build coalitions, says Jeremy. “I see it as a step, and I’m an early-stage investor. We can gather support and go to much larger foundations for additional funding, then take our narrative and solid plans – developed by bright people with a real interest in the issue – to the government for funding. At the moment, there’s about a half-billion dollars in bond money that’s been allocated to Salton Sea projects, so we do have a start on remediation. Now is the time to move forward in a unified effort.”

In addition to his $40,000 donation to establish the Salton Sea Fund, Jeremy has committed $40,000 to IECF’s Here for Good Fund to support its community leadership work, and another $20,000 to the President’s Innovation Fund. “I feel part of my duty as a director of IECF is to help build out the Foundation’s capacities. It has this incredible history of 80 years, a wonderful, dedicated staff, and a strong board. I love the history of it, but what I’m really focused on is what the organization looks like in 80 years. We need to increase our asset base so we can invest more in the region and attract more investment – philanthropic and business – to the Inland Empire. And we need to make sure that IECF has the ability to continue the good work it’s doing. Without a strong foundation, there would be no Foundation.”

Who should participate in our 80th Anniversary Celebration? Jeremy’s answer is quick and clear: “Anyone who cares about the future of our region. Do you really want to make a difference and leave a legacy? IECF offers the best opportunity to do that.”

More information is available in a downloadable pdf here.

Sign up for our monthly eNewsletter to stay up-to-date on the impactful work we’re doing with the help of forward-thinking donors like Jeremy Hobbs.

PHOTO 2: From a fly-over of the Sea arranged by Audubon, showing the North Shore Yacht Club in the foreground, which used to have access to the Sea but now doesn’t because of reduced water. The Salton Sea, 50’ deep at the deepest, is losing about 1’ annually, exposing thousands of acres of playa.