Spotlight on Boo2Bullying: Working to Eradicate Bullying in the Coachella Valley 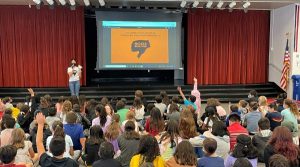 Bullying affects everyone, a sobering fact that Dimitri Halkidis sees all too clearly and has dedicated his life to raising awareness about.

In 2011, Halkidis founded Boo2Bullying in response to the challenging issues today’s youth experience due to bullying. His efforts began as an online youth empowerment organization, but the ripples effects spread far and wide, propelling the group to establish a model consisting of community outreach—going to schools, meeting with a variety of youth groups, and the like.

Since that time, Halkidis estimates the organization reached nearly 27,000 kids in the Coachella Valley between the three school districts.

“The most important thing that Boo2Bullying does is speak from the heart and create a dialogue and an atmosphere in which kids can feel safe,” Halkidis says. “A lot of times, you’re going to school, your friend doesn’t really know who you are—whether that be something like wanting to come out and you’re scared, or whether you come from an abusive family. There are so many dynamics to kids and why they don’t open up and trust.”

The organization has many noteworthy programs, such as School Assembly, Community Outreach, Empowerment Through Art, Mothers Against Bullying, and Mentoring.

Often, a triangle approach is implemented when working with others. This involves working with the bullied party, the individual who has bullied, and those who are standing by and doing nothing. Working with these core groups of kids, parents, and teachers, and educating them about the effects of bullying, is vital and the organization provides practical tools for all parties in an effort to eradicate bullying.

Recently Boo2Bullying received a grant from the Inland Empire Community Foundation through the 150 Circle of Giving Fund, which Halkidis calls “a wonderful surprise” that will aid in day-to-day operations and fuel short- and long-term goals.

One aim is to rev up for summer after-school programs in the Valley in the hopes of going “full force” in the new school year—key after a swirl of pandemic-era unpredictability.

“We definitely want to continue creating a social environment on school campuses that’s talked about after we leave,” Halkidis says.

Another goal includes raising awareness about the potential effects bullying has if it’s left unattended. One recent Health Assessment and Research for Communities (HARC) study, for instance, reports that in Coachella Valley, one out of three children ages 6 to 17, have had two conversations with their parents/guardians about suicide.

“Having these kinds of important conversations opens us up more to ongoing dialogues,” Halkidis shares.

Halkidis cites Cassie Scerbo as one success story. The star of ABC Family’s Make It Or Break It began as an ambassador and is now Boo2Bullying’s Vice President and Brand Ambassador.

“The No. 1 thing that kids are influenced by are ballplayers, then actors and musicians, so to have Cassie join us inspired other kids,” Halkidis notes. “We started getting referrals and applications, young people saying, ‘I want to be an ambassador and do what Cassie does.’

“So, we want people to get involved and help us make kids feel they’re not alone, which they’re not,” he adds. “We’ve all experienced some sort of discrimination and intolerance in some capacity in our life, or we’ve witnessed it with others. We are all about outreach. We’re here to help.”

This article originally appeared in the Desert Sun, May 2022.

Stay informed about the good work we’re doing through the power of philanthropy. Sign up for our monthly eNewsletter!