Spotlight on Youth Mentoring Action Network: Building the Power of Youth Through Mentoring, Education and Wellness 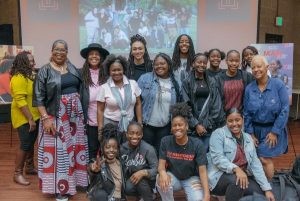 This article originally appeared in the Press Enterprise, January 2022

Founded in 2007, Youth Mentoring in Action Network (YMAN) was created by two veteran educators who wanted to ensure youth were heard and given the power to create their own programming. The organization believes that youth have the potential to shape their schools and communities. Its programming builds the power of youth through mentoring, education, and wellness.

Critical mentoring is at the forefront of all YMAN’s programming. Critical mentoring is a means of making programs impactful and ensuring they are relevant to communities of color. This equates to creating goals in collaboration with the youth being served and including issues of race, class, gender, and sexuality. Another component of critical mentoring is building staff and a volunteer base that reflects the community served. Then those mentoring are trained to understand program goals, research-based mentoring skills, and effective strategies.

“Critical mentoring is leveraging the intersectionality of DEI and mental health into your approach with talking to students,” YMAN’s communications director, Andres Herrera said. “Our approach to teaching students is making programming that is voiced by them and led by them so they can thrive.”

YMAN partners with young people looking to be leaders, offering a stipend of $1,000 to those who are chosen through an application and interview process. Young artists, activists and those with an interest in health and wellness are chosen to build programming, organize other youth and provide resources.

Programming that youth assist in creating includes the Youth Artist Collective which shapes young artists. Students learn the ropes of production, composing their own music and producing their own videos in a professional studio. Working with Nonstop Management out of Los Angeles, students in the program learn what it means to be a music industry professional.

“The Inland Empire is a breeding ground for some of the most creative people in the United States and we want it to be a culturally impactful place,” Herrera said. “The students are here and just need someone to give them a chance.”

YMAN also offers a wellness program that includes a community garden, a self-care lab, and mental health programming through a professional therapist.

The organization also reaches outside of the region to increase education and mentoring opportunities for local youth. Recently, YMAN’s Black Girls (EM) Power initiative had a national search for five young Black women who were movement builders and activists doing critical work in their communities. Recipients received a $5,000 stipend, social entrepreneurship mentoring and a weekend retreat. Participants shared their experiences, suggestions, and ideas for impactful programming for young Black women.

Recently, YMAN received a grant from the IE Black Equity Fund through the Inland Empire Community Foundation. The organization depends on grants and donations to provide programming and it can be challenging to secure funding to support programs that focus on power building, according to Herrera.

YMAN’s programming teaches young people how to leverage their skills and share their expertise and passion with their communities. While this doesn’t involve getting a large number of students in a room like most grant-funded programs, empowering a smaller number of individuals has a ripple effect, Herrera said. All of the participants in YMAN’s programs are empowered to take what they learn and teach it to others. YMAN believes that this is how you create change in a community.

“We work with a lot of high school youth,” Herrera said. “I get to see them from freshman year when they are still shy to when they are seniors and they become powerhouses. I am consistently so proud of these students every time.”