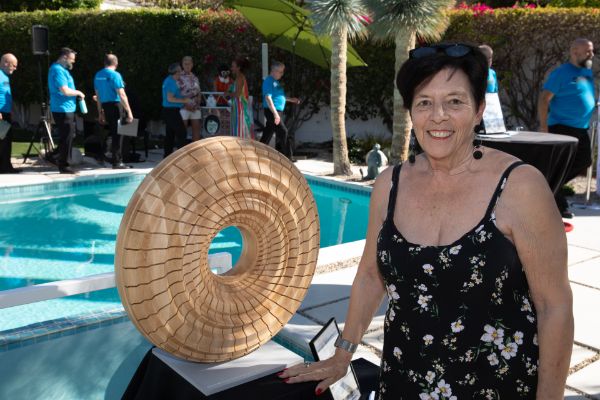 Thanks to the efforts of the Palm Springs AIDS Memorial Sculpture Task Force, Palm Springs is moving closer to having its own memorial sculpture to forever immortalize the lives lost to AIDS.

A vibrant team of intrepid souls has fueled the project for some time, chief among them fundraising titans Ellen Wolf and Paul Clowers of the Palm Springs Development Department. Dan Spencer, a successful architect, is also in the mix as task force spokesperson.

Collectively, all parties hope to see an AIDS memorial sculpture in a downtown Palm Springs park by 2023.

“We have always wanted an iconic piece that is really art with a purpose,” Spencer says of the project. “It would combine several wonderful things about our community and be something we can have forever.”

Spencer has contributed to the nonprofit sector for some time. He’s worked with a variety of medical facilities and gay youth centers and was on the design team for the Key West AIDS Memorial. After moving to Palm Springs more than 10 years ago, he gave a presentation at the Palm Springs Art Museum and noted that an AIDS memorial sculpture would be a stellar addition to the town and its sculptural landscape.

“I thought—Palm Springs. It just struck me that there should be something that’s a part of our heritage,” Spencer says of the idea. The Palm Springs AIDS Memorial Sculpture Task Force was implemented to assure that the stories of those who lost their lives to HIV and AIDS would be remembered.

Last year, the Palm Springs City Council approved the task force’s proposal to install a memorial sculpture in the downtown park located at Belardo Road and Museum Way, fueling the cause.

Recently, the task force received a grant from IECF through the Sheffer/Scheffler Donor Advised Fund for the purpose of creating a scale model to show to potential donors, and to help create a website and marketing materials. Those funds, in addition to donations already received, will assist the task force in reaching its $580,000 fundraising goal, which includes site prep and installation costs.

The Public Arts Commission of the City of Palm Springs recently approved $65,000 for the site prep and installation, and that request will move onto the City Council in the near future.

Having local artist Phillip K. Smith III on board as the sculpture’s designer is surely a big plus. Smith’s long list of works—including standouts like 2014’s Reflection Field at Coachella Music & Arts Festival and 2017’s Desert X installation, The Circle of Land and Sky—are often considered sublime.

“Creating a memorial sculpture is one of the biggest callings of an artist because you want to make sure you’re respecting those we’ve lost, and those who have lost loved ones,” Smith says. “After being approached to do this, I thought about the project for about a month. Then I came into the studio earlier one day and just sat down and drew a rendering. That doesn’t always happen. It was an immediate step forward.”

Smith’s design, a striking circular sculpture, will be carved out of limestone.

“It was important to me that this be something tactile—that people could touch it,” he adds. “So often in the art world, you’re not allowed to touch the work. This will be out in the open and my hope is that by people touching it, they become connected to the community that’s been affected by AIDS, and that they, themselves, tactilely, feel that sense of unity, grace, and healing.

Another interesting aspect of the work is that there will be a QR code on site for individuals to access all the people being remembered. The code also provides a link to all donors, educational and medical services, as well as the National AIDS Memorial and all the quilt sections.

“Through a lot of my work, I seek out experiences that bond us together as human beings through positive experiences,” Smith shares. “I’ve always felt that while there’s been this incredibly challenging emotional disease that is full of loss, you could also see the silver lining—the connectivity of the community.

“I was drawn to this project based on how it will bond a community together,” he adds. “I think those kinds of experiences are really important and very powerful.

Follow this link to donate or learn more about the Palm SpringsAIDS Memorial Sculpture.

This article originally appeared in the Desert Sun, June 2022.

To learn more about the power of philanthropy in our region, sign up for our monthly eNewsletter!