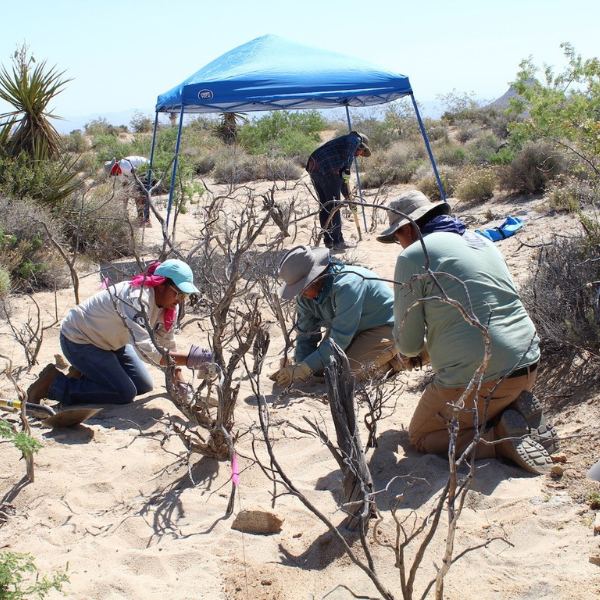 Every day throughout Coachella Valley, countless organizations work painstakingly to ensure everything from civil rights and proper health care to environmental protection and stewardship of the area’s diverse and historic sites.

For the latter, Native American Land Conservancy stands out. Its mission to acquire, preserve, and protect the area’s sacred lands has never been more vital.

“Tribal people in the United States have lost the vast majority of the lands they used to hold as a nation,” said T. Robert Przeklasa, Executive Director of Native American Land Conservancy (NALC). “These places have sacred sites on them—places of religious importance—and those sites didn’t stop becoming sacred or important to these people once they were taken over by the federal government or sold off and wound up in private hands.”

NALC works to ensure tribal peoples have access to those sites, Przeklasa added, and that, if they’re in private hands, they are discovered and transferred back to tribes or the organization to ensure proper stewardship.

“It’s important that tribal peoples have access to these sacred places,” Przeklasa stressed.

Launched in 1998 under the leadership of an intertribal cultural group interested in protecting off-reservation sacred sites in Southern California, today NALC remains vigilant in its mission as significant development within Inland Empire, Coachella Valley, and Morongo Basin continues.

Additionally, NALC provides educational programming for Native American youth and the public. Of note are its scientific studies on cultural, biological, and historical resources on sacred lands.

“One thing to also note is how very important water is to people in a desert area,” Przeklasa said. “I could step out on a limb and say, for all the tribes of Mojave Desert, water is a sacred thing. And bodies of water, like springs and creeks—things like that—are sacred places, springs in particular.”

To that end, NALC’s newly launched campaign, Save Our Springs, aims to share with broader tribal populations current threats to springs throughout the desert.

“We want to make sure all tribes are aware of the severe threats,” Przeklasa noted. “Climate change leads to general drying of the area under severe drought. There are also several industrial endeavors to watch out for—people wanting to, for lack of a better word, mine ancient aquifers in the Mojave Desert. If they do that, springs, which are fed from these aquifers—from water that goes back tens of thousands of years—are compromised. “You take a drink of water out of that spring and the last animal or being that water touched could have been a saber-toothed cat, you know.

“So, if you’re mindlessly taking water out, the springs dry up, which has a whole host of environmental issues, because so many animals, plants, insects, and everything depends on it.”

“It means a lot to them—and to their religion,” Przeklasa added.

Recently Native American Land Conservancy received a grant from Inland Empire Community Foundation through the Amazon Environmental Literacy Fund. Przeklasa stressed that those resources will be used to engage tribal populations with tribal elders and religious practitioners to highlight the importance of resources and the threats to the springs.

Przeklasa, who was on the NALC board for many years, moved into the executive director role last year.

“It’s very important work we’re doing here,” he said. “For a long time, it was just a very small team of people who had a big impact. We manage nearly 2,500 acres of land sacred to two cultures that are very old. That’s probably the most exciting thing to me.”

Of what he’d love most for the public to know about the organization, Przeklasa noted a recent lawsuit NALC filed against the U.S. Department of the Interior.

“In the waning days of the Trump administration, the Bureau of Land Management issued a right-of-way to one of these water mining corporations—illegally,” he said. “But they didn’t follow the requisite environmental reviews or the requisite tribal consultation process to issue it. It wasn’t something that you really heard a lot about in the news. We took part in the litigation [to rectify that].”

Just last month, in fact, the local circuit court issued a favorable ruling in NALC’s case and the government repealed the right-of-way that was issued illegally.

“We do a lot of quiet background work, fighting for the protection of sacred places and sacred resources, which people might not even be aware exist,” Przeklasa said, “but that doesn’t make them any less important.”

This article originally appeared in the Desert Sun, October 2022.