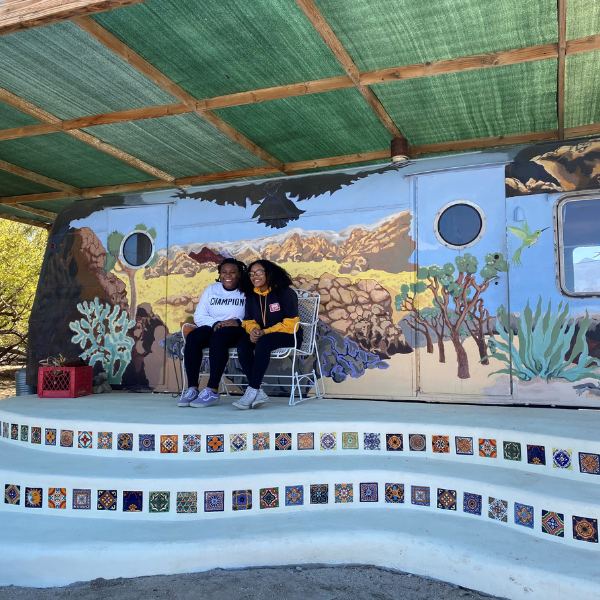 Creativity and environmental stewardship converge in an artistic symphony at Harrison House Music, Arts & Ecology. The Joshua Tree-based lair, a residency and performance program for international artists and environmental activists, was the former home of Lou Harrison, considered to be one of the greatest American composers of the 20th century.

Harrison died at the age of 85 in 2003. The man was revered for using world music influences and new instruments, helping introduce the percussion splendors of gamelan music—traditional ensemble music of the Javanese, Sundanese, and Balinese people—to America.

“Being in the desert gives you a feeling of being part of a big picture,” says Harrison House Founder/Director Eva Soltes. “It opens you up. There’s less inhibition. You can sing loud, run far, watch the sky, watch nature. That’s partly why, after many years of being Harrison House Music & Arts, we added ecology to our mission.”

The organization’s permaculture courses and permaculture design certifications stand out, existing alongside a variety of innovative arts-based events and classes. Collectively, they provide a unique space for artists of all kinds to explore the intersection of art and ecology.

“I feel like we can be a positive example,” Soltes says. “Without the earth, there can be no art. The whole idea of regenerative living, creating living soils, growing food, using what water we have is important. We say, ‘grow it, spread it, sink it, keep it on your land. And hydrate your land. I think of this as trailblazing, because there’s going to be more deserts, we all know that.”

Soltes’ journey to and through Harrison House is noteworthy. She’d long been Harrison’s associate and advocate prior to his death. After Harrison’s life partner of 35 years, William Colvig, passed away in 2001, the composer, at the age of 84, built a straw bale artist’s retreat in Joshua Tree. It soon became his dream home, designed as an ideal sound environment.

When Harrison died several years later, Soltes leaned into her creative prowess as a producer, director, and performer. She conceived a program inspired by Harrison’s creation, and purchased the building, furnishing the house with Harrison’s own artwork and possessions.

Today, Soltes says, Harrison House is a kind of monument to Harrison’s lifetime of experimentalism, activism, concern for the environment, and commitment to encouraging creativity.

Soltes says the organization launched the Joshua Tree Foundation for Arts and Ecology, with its home at Harrison House. “We’re really thinking regionally about where we are and what how to use our resources,” she adds.

Recently the Joshua Tree Foundation for Arts and Ecology received a grant from the Amazon Environmental Literacy Fund through the Inland Empire Community Foundation. Soltes says the funding will greatly benefit the organization’s current efforts to optimize creativity and cultural development with each of its residencies and public offerings, especially those with an ecological slant—from talks, courses, and other events.

One recent event was a screening and panel discussion of the movie, Saging the World.

The film illuminates the sacredness of white sage among Indigenous peoples, noting how it’s an “endangered plant within an endangered ecosystem.” It draws parallels to the endangered status of specific fish and The Great Barrier Reef. Filmmaker Rose Ramirez will be on hand, alongside Craig Torres of Chia Café Collective in a panel moderated by Soltes.

“Sage has been an important part of Native American peoples’ spirituality and beliefs for generations,” Soltes says. “It’s a very specific thing in their culture, but their fields are being raped of sage because everywhere in the world, people want to have a smudge stick, right? We need to start talking about these things. I’m somebody who goes, ‘Well, what resources do I have? What can I throw at this?’”

Other upcoming events and workshops, such as “Introduction to Permaculture” are slated for  March 31-April 2, 2023. And on Nov. 15, composer-in-residence Gabriella Smith unveiled a work-in-progress.

“You know, from time to time, I open my eyes at night and see the ‘galaxy’ and all the stars, and I begin to really integrate into my person that we are on a rock hurtling through space, all together, and that we are part of a much bigger picture,” Soltes shares. “That’s what I love most about the work we do here. We’re getting information out there.”

This article originally appeared in the Desert Sun, September 2022.