Spotlight on Camp of Champions: Better Grades with Soccer Balls 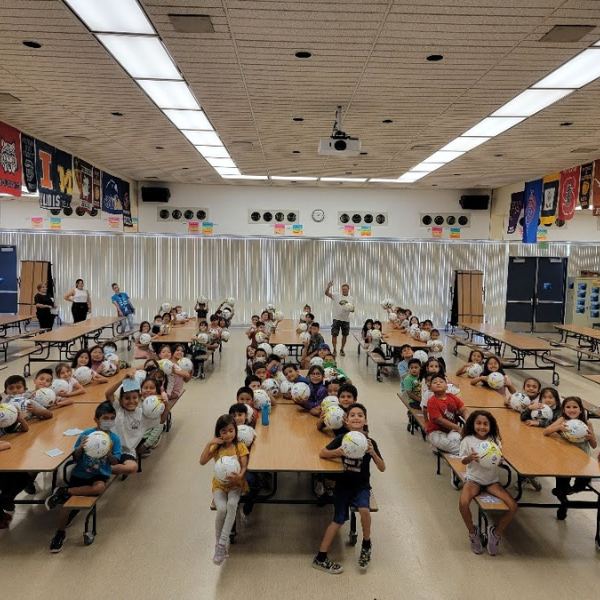 Kick it. Bump it. Catch it. Those are few things you can do with a soccer ball, but one of the most interesting things Tim Ingram realized he could do with it was motivate elementary, middle, and high school students to improve their grades and boost their self-esteem.

Enter: Camp of Champions. Ingram is the president and director of the innovative nonprofit, which began back in 2007 when he introduced the potential soccer clinic to the principal of Desert Hot Springs Elementary School, the school his two sons attended. Initially, he was told about 10 students would participate.

Six weeks later, things took off. The principal informed him that nearly 80 students lifted their overall grades from below the state level because they wanted to attend the sports camp.

“I said, no problem. I can do this forever,” Ingram recalled “And we did. Another school said, ‘Can you do it for me?’ Then another. In our biggest year, Camp of Champions reached 60,000 kids.”

The nonprofit held camps every week—from Twentynine Palms to Mecca. What began as a goal to improve general reading scores has, over the course of 15 years, scored big time. Today, Camp of Champions is highly incentivizing for students and the organization has two main programs on that front.

“It’s really effective for schools to use, because most of these kids are at title nine schools, which means that they’re below the poverty level,” Ingram noted. “Most of these kids are Hispanic, so English is the second language. Soccer is definitely their favorite sport and having a quality soccer ball sitting at the front of the classroom is motivational.”

Camp of Champions’ other program is a drone technology camp for school districts where Ingram and his team host a drone boot camp, teaching students how to use drones in cinematography.

Recently, Camp of Champions received a grant through the Inland Empire Community Foundation Community Impact Fund. For Ingram, those resources, and other fundraising efforts, are vital now, more than ever. He specifically sites the great hit the organization took during the pandemic.

“With Covid-19, we were shut out of funds for basically two years finding the money to stay alive,” Ingram said. “All our fundraisers dried up; we couldn’t do any. Some of our sponsors went bankrupt. We lost close to 90 percent of our funding, and it was brutal because we’re a very small charity.”

Ingram is the only employee, in fact, and has never taken a salary. Many other people donate their time, assisting part-time. Recent funds and donations allowed the group to stay in business and this year, relaunch its soccer ball program. It now has a waiting list of 20 schools wanting the program.

Interesting to note is that it costs $50,000 to produce the soccer balls in any given year. Sponsorships are offered on the actual balls, too, with space for names of potential sponsors.

Ingram was always a sports activist. When he was 7 years old, his hockey hero was Rogie Vachon, a goalie from the Los Angeles Kings in the NHL. He’d spend hours at his desk drawing pictures of his hero and finally found the courage to send the athlete a letter and one of his drawings.

One day, he returned from school and his mother told him had mail—a letter from Vachon. “The correspondence contained kind words of encouragement, telling me that I could be an even better hockey player than him if I committed to working hard and stayed out of trouble,” Ingram noted.

It inspired him to follow his own dreams of becoming an athlete when he was an adult. Decades later, after Camp of Champions launched, Ingram had to get a hip replacement, forcing him to create new pathways for motivating students.

That’s when he came up with the soccer ball motivator program.

“I love working with kids,” he said, “and I love seeing them achieve something great.”

As the nonprofit heads into 2023, it hopes to continue strengthening its vision to impact the lives of youth through encouragement, reward, physical activity, and accountability. Creating “champs” is the name of the game.

Learn more about Camp of Champions at campofchamps.info

This article originally appeared in the Desert Sun, November 2022.