This article originally appeared in the Desert Sun, December 2021 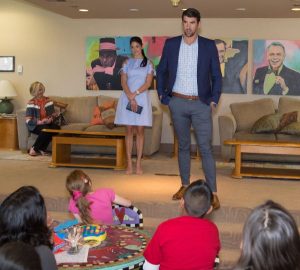 Founded in 1986 by Barbara and Frank Sinatra, The Barbara Sinatra Children’s Center was established to give support and self-esteem programs to teen girls who had been sexually abused.

Today, the organization provides family, group, and individual therapy in conjunction with special programs for children who have suffered abuse and neglect or are at risk of abuse.

“Without the Children’s Center, we would lose the ability for law enforcement to conduct forensic exams in a child-friendly environment,” the organization’s director and executive officer John Thoresen said. “The last thing you want to do is take them to a police station where children may think they did something wrong.”

The Children’s Center sees over 600 children a year for outpatient counseling. Weekly one-on-one sessions are provided with a clinician and the young client or an adult associated with the client. These sessions provide support, education, and behavior modification for clients who have experienced trauma. In addition, children have access to group therapy where 6 to 18 clients of a similar age participate in programs such as expressive art, self-esteem, tennis life skills, and support groups.

In the last few years, Barbara Sinatra Children’s Center has added global child abuse awareness and prevention to its mission. The organization had created an animated short film project in collaboration with Wonder Media and the Joshua Center at the University of Washington. These animated shorts educate children of all ages about how to respond to abusive behavior such as unsafe touches as well as other physical and emotional abuse. The videos can be found through the organization’s website and on the Fight Child Abuse YouTube page where they have had millions of views.

This work both gives children the tools to recognize abuse and makes it harder for perpetrators to attract and groom potential victims of abuse. According to Thoresen, girls that have been sexually abused are more at risk for teen pregnancy, drug addiction and to become runaways. He also noted that 30% of women in prison were abused and did not receive treatment for their trauma.

“I think we save kids’ lives,” said Thoresen. “Without treatment or without them recognizing abuse, who knows what would happen in their lives.”

Over 80% of children who receive counseling at the Children’s Center are from families below the national poverty line. The Children’s Center receives a small percentage from fees, private insurance and government reimbursement, but depends on donations to provide programming.

Recently the Barbara Sinatra Children’s Center received a grant from a donor advised fund from the Inland Empire Community Foundation. The organization has a modest endowment that assists with operating expenses and all money raised goes directly to support programs.

Those interested in helping the program can also attend their fundraising events. It’s next event, the Champion Honors Luncheon featuring Linsey Vonn will take place on Friday March 11, 2022 at the JW Marriot Desert Spring Resort and Spa. The organization always welcomes donations including in-kind gifts such as toiletries, blankets, clothes, and underwear.

Thoresen encourages community members to watch the videos produced by the center, learn what child abuse is, and do everything they can to protect their kids. He also encourages parents to not be afraid to get their kids into counseling and to get professional help.

“There are other agencies that deal with emergency housing, but the kids still need counseling,” Thoresen said. “It’s important the community knows this resource is here for the community and we are a child-friendly place.”